
Leave a request
Our specialist will contact you and answer any of your questions
Main — Blog — Guides — iPhone Wi-Fi
 11.03.2020

Why cool your smartphone

Have you seen an iPhone asking for cooling? We were lucky! From Yekaterinburg, a master came to train bga soldering and brought with him 6S. Here is a malfunction ” Temperature. Cooling is required before using the iPhone.” It would seem as if Wi-Fi can affect the protection of the phone from overheating, it turns out it is possible! And when you bring a smartphone with such a malfunction to the service, here is the same step-by-step instructions for performing repairs.

The warning appeared on the smartphone screen about 1.5 minutes after switching on. At the same time, the heating of the upper part of the body was tactile. The warning message began to appear after the iPhone fell. 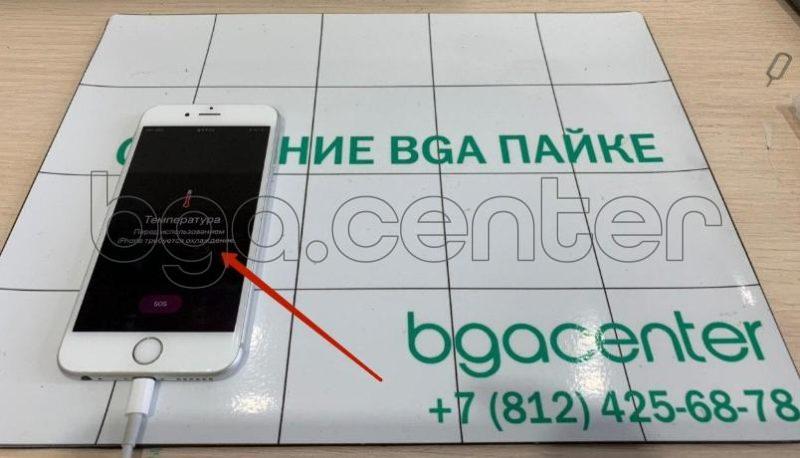 The sequence of the diagnostic: 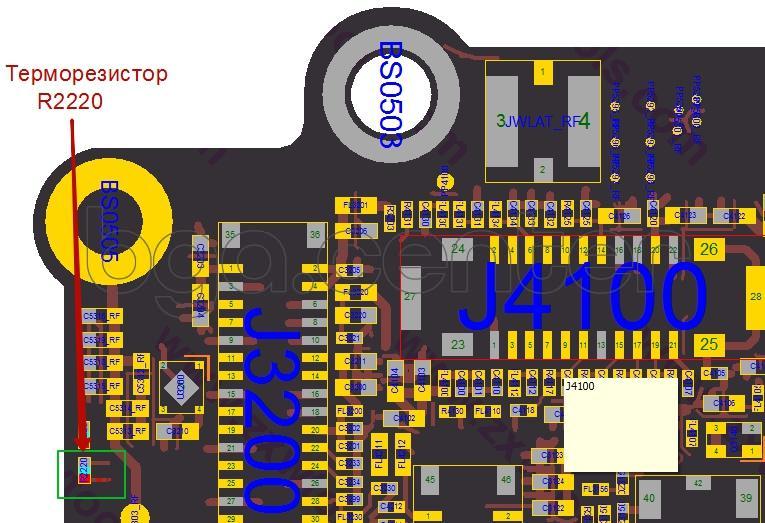 Zillion X Work software is used for soldering diagnostics and training. Having defined the thermistor in the diagram, we see that it is installed in the RCA_NTSC_RETURN line and is a self-regulating heating element-a thermistor. And designed to control temperature changes. 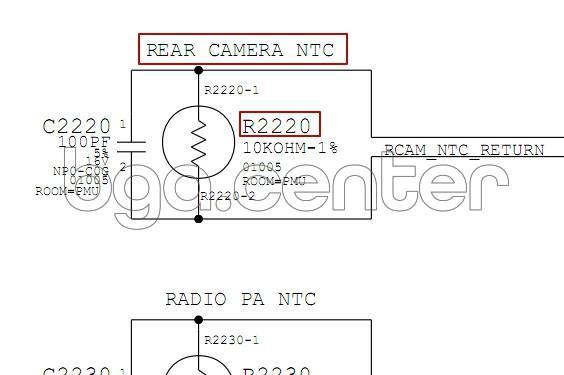 When we expand the Board, we see that the Wi-Fi chip is located on the reverse side (zillion work designation: U5200_RF). The next assumption: this chip is faulty, or rather it is in a short circuit. This, in turn, is accompanied by a local increase in temperature and this is the reason for the operation of the thermistor.

In order to check this version, we decided to solder the Wi-Fi chip.

Before soldering the bga chip, the first thing to do is to remove the compound around the perimeter of the U5200_RF. 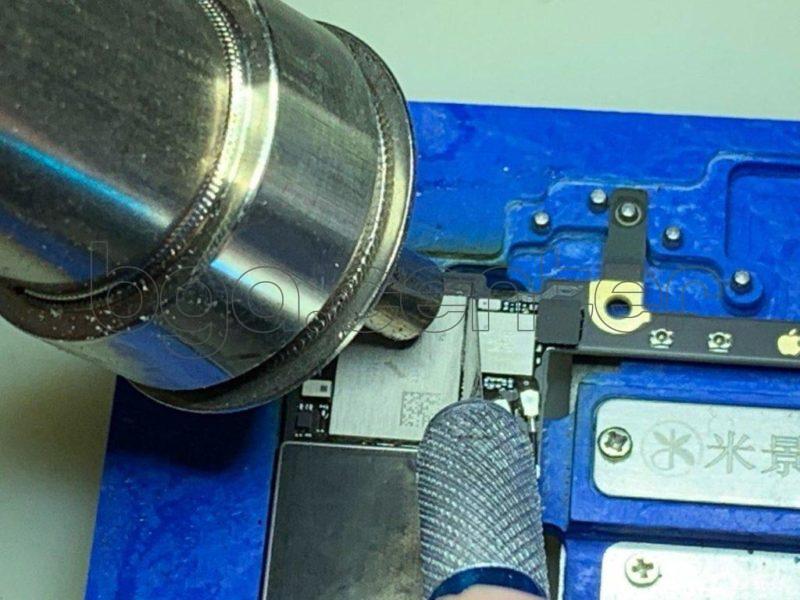 Be careful when cleaning the compound. Since almost directly to the Wi-Fi installed bga chip U0900, which is an ANTI-ROLLBACK EEPROM. If the device is mechanically damaged, the phone will “fall on the Apple”, that is, it will not be able to boot up to the desktop. And for subsequent repairs, you will need to replace this epromka with a similar one, with subsequent phone firmware, which means the loss of customer data. 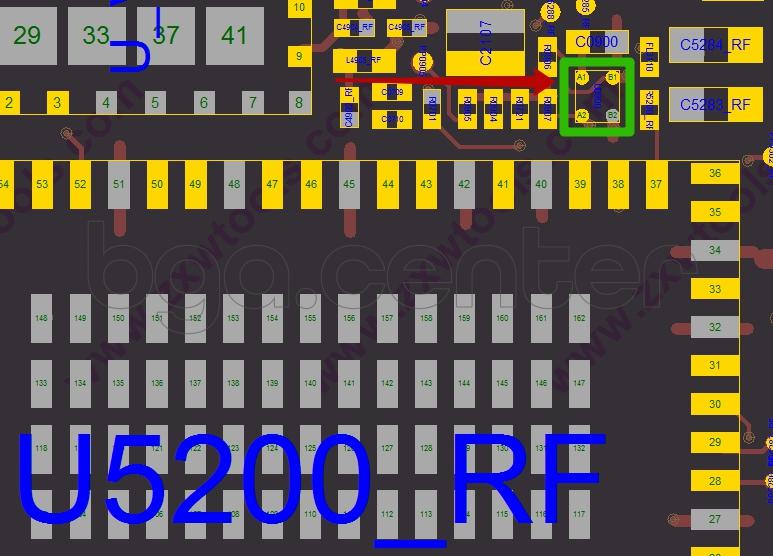 After cleaning the compound, heat sinks were installed on the Board and the Wi-Fi was dismantled. Compound is a special polymer resin designed to strengthen very small soldering contacts, as well as to protect radio components from moisture. The compound softens when exposed to a stream of hot air with a temperature of 210-240 degrees Celsius. 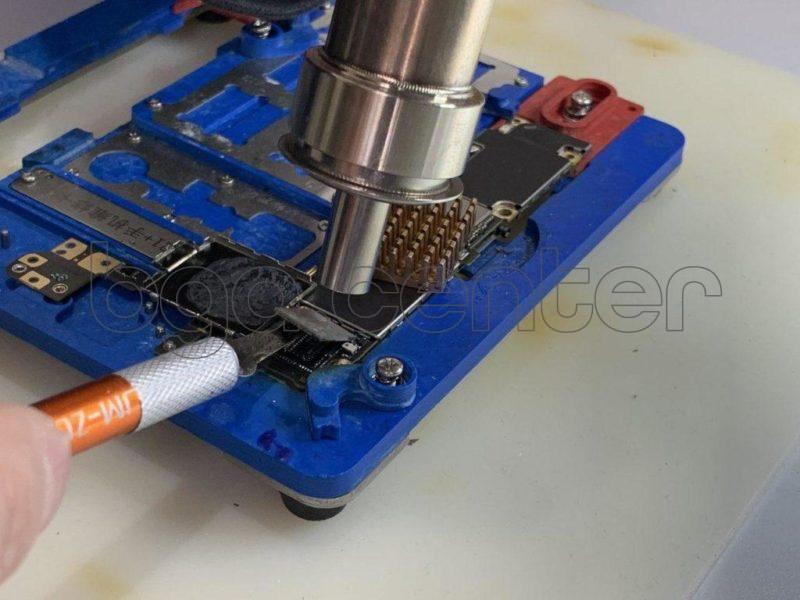 To tin the contact pad of low temperature solder – an alloy to the rose. The melting point of which is 95 degrees Celsius. One of the purposes of the rose alloy is to be used as a molten metal lubricant. 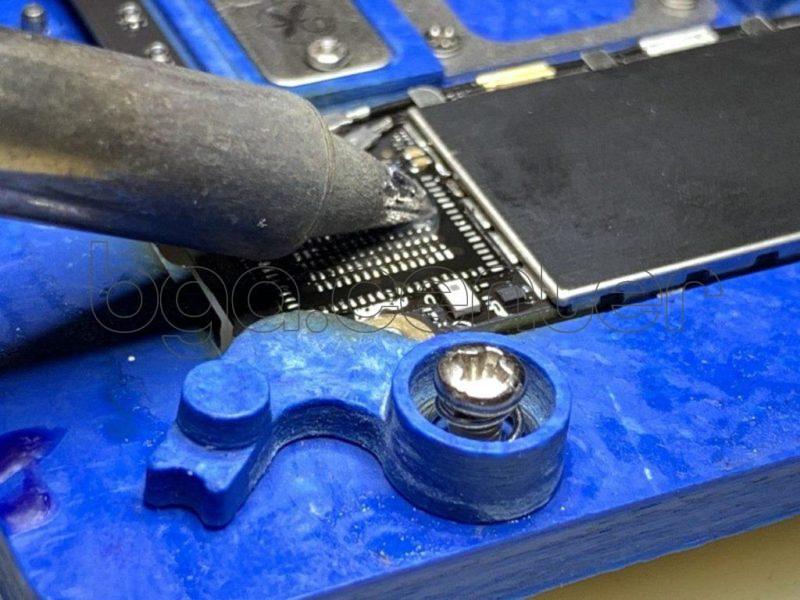 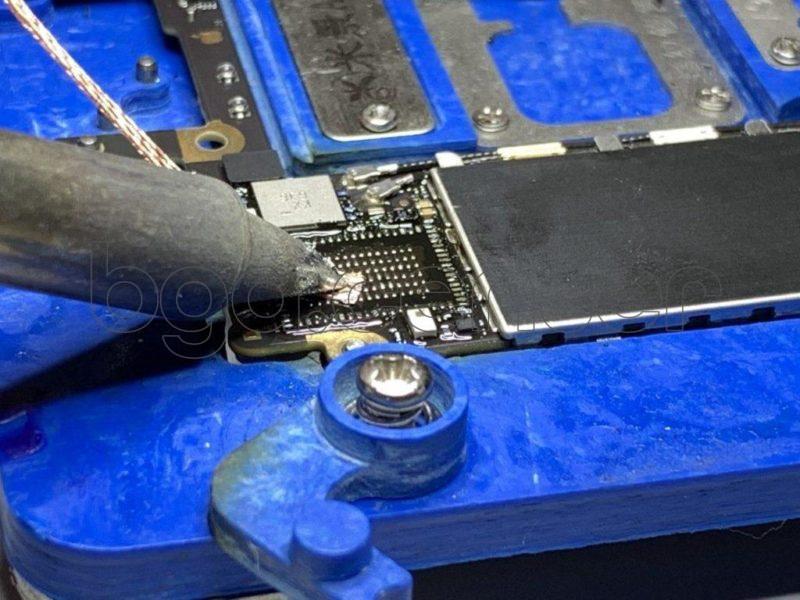 Preparation of the braid Board

Using a spatula of a special shape and a hair dryer, Quick 861 finally removed the remnants of the compound, thus completing the preparation of the Board for the subsequent installation of Wi-Fi. 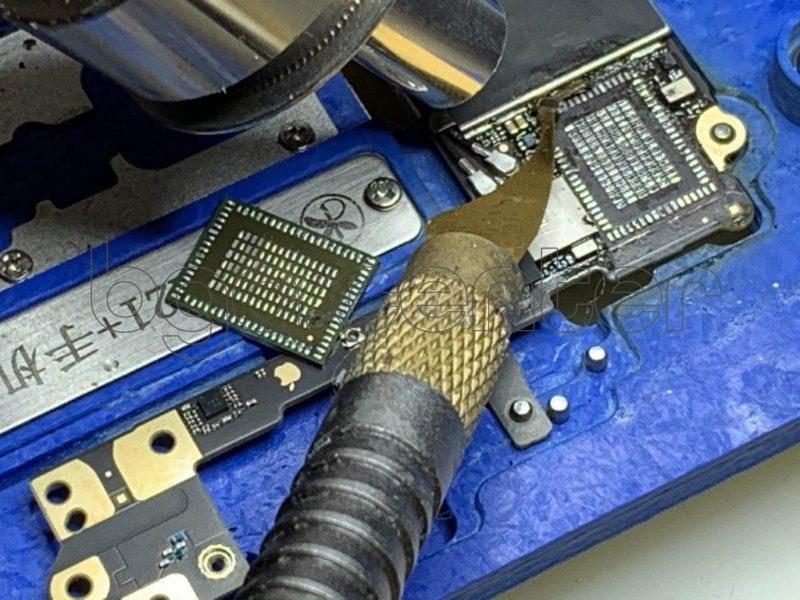 Removal of the compound

After the Board temperature dropped, the remaining flux was removed using the Degreaser Board cleaner aerosol.

The final iPhone 6S Board is shown in the photo below. 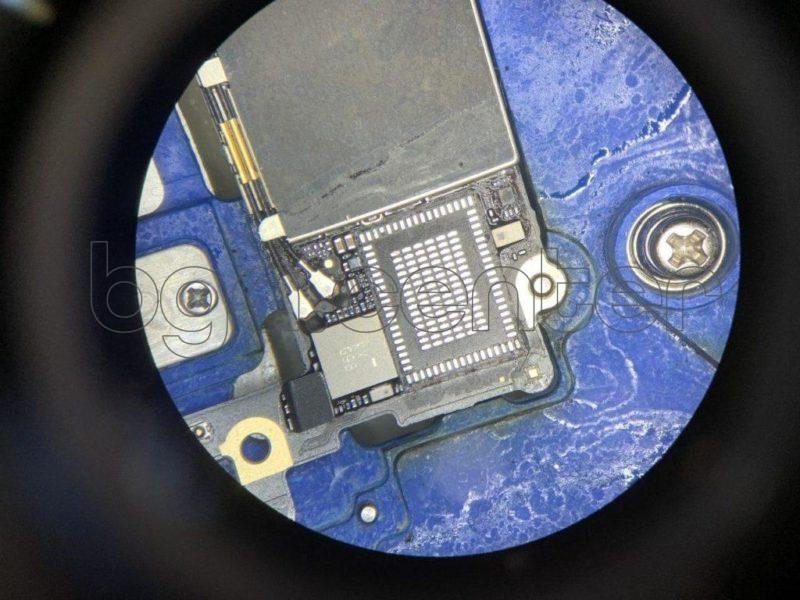 It is important to make sure that there is no short circuit in the phone’s power supply after soldering:

Installed the system Board in the case, connected the display module, loops and battery; turned on the phone. For the test, the phone was “loaded” and during prolonged operation of the iPhone, the heating did not occur. And the thermistor didn’t work. 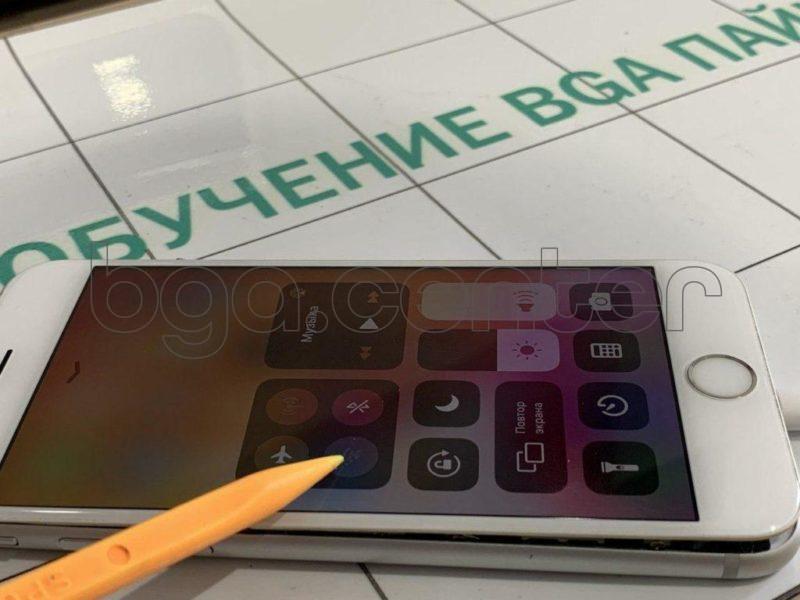 Hence, we conclude that the cause of this fault was a faulty u5200_rf chip.

It was decided to replace the Wi-Fi chip using the” donor ” iPhone 6S Board. 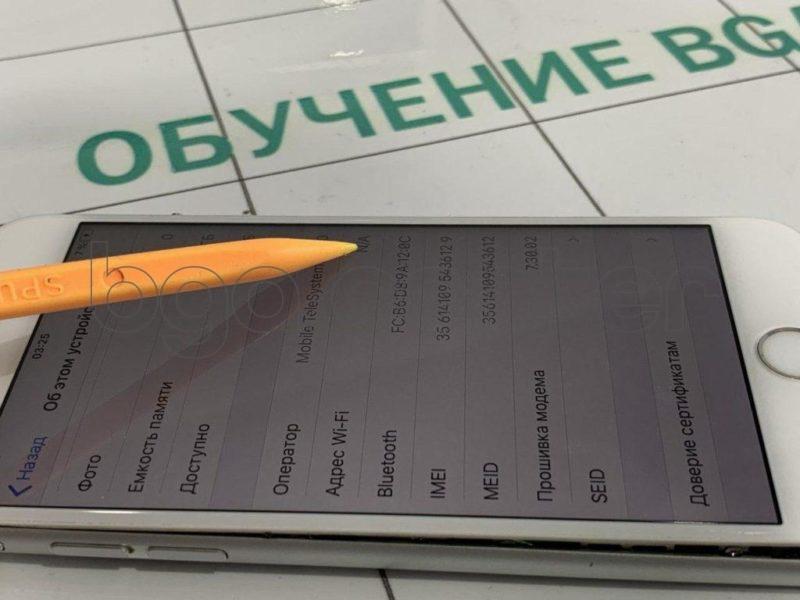 Since Wi-Fi is programmatically locked in the phone’s memory, so before installing a third-party chip, you need to perform the procedure – unlocking the Wi-Fi chip. And for this purpose the IP BOX PCI e programmer is used 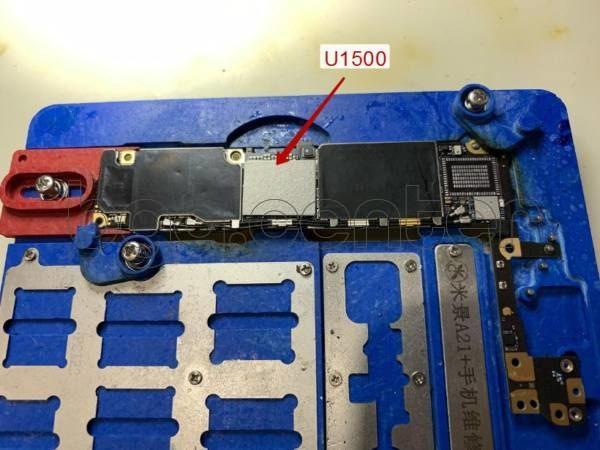 In other words, the next step is soldering the U1500 and unblocking Wi-Fi.

After dismantling the memory, the contact pad was cleaned from the compound and solder. Then the contact resistances were checked with a multimeter for short circuit or circuit breakage. The measurement results showed that the measurements correspond to the data taken from the obviously serviceable motherboard. IPhone 6S Board, prepared and tested for memory installation. 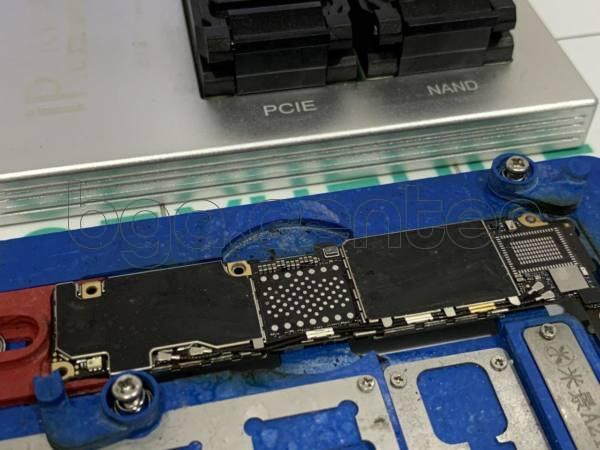 Before using the programmer, i.e. before installing NAND in IP Box, you need to prepare a flash drive. To clean from the residue of the compound and the remaining solder. Memory is installed in the programmer block by the key that is marked on the chip case. 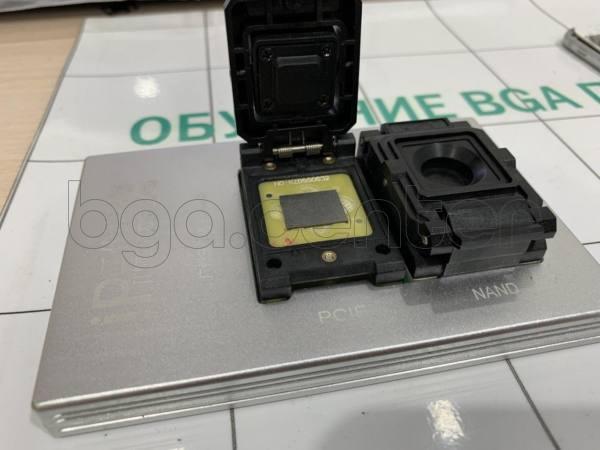 After unblocking Wi-Fi, tin-lead paste “rolled” the flash drive and soldered it to the contact pad on the key.

Before soldering, FluxPlus flux gel was applied to evenly distribute the temperature and improve the surface tension of the solder relative to the contacts. 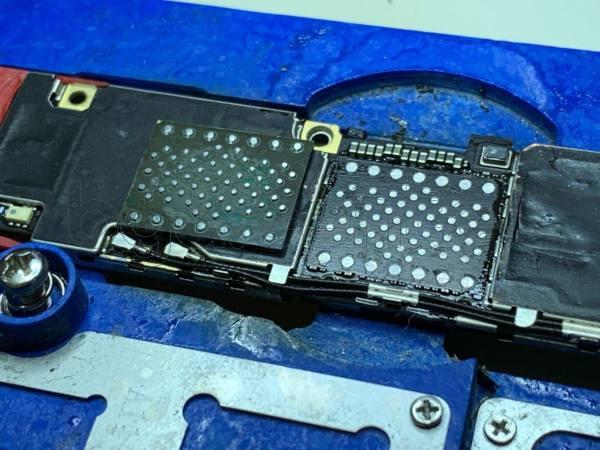 Before soldering the Wi-Fi chip taken from the “donor” Board, the resistance of the contacts was checked. The resistances correspond to the data specified in Zillion X Work. Hence, we conclude that it is possible to solder the chip. 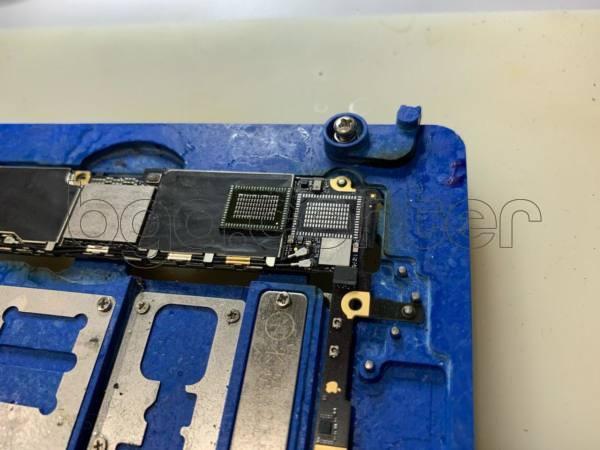 Before soldering, heat sinks were installed on the Board to prevent damage from high temperature of the adjacent chips. Soldered Wi-Fi by key (point on the chip case). 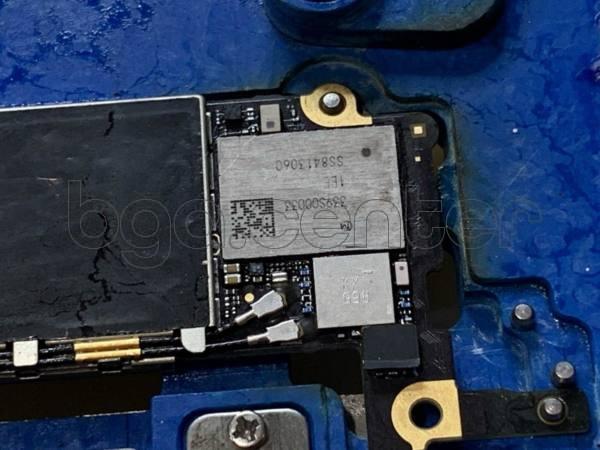 After the temperature of the soldering site fell to room temperature, the power supply circuits of the Central processor (CPU) and RAM were checked for the absence of a short circuit. Additionally, for verification, the Board was connected to the laboratory power supply, previously limiting the current to 0.5 A. no short circuit was detected.

Washed the remains of the flux.

Installed the iPhone 6S system Board in the “client” case and turned on the phone.

The iPhone booted up to the desktop. The phone finds Wi-Fi networks and connects to them successfully. During continuous operation, the temperature of the housing does not increase. Repairs are completed.

The result of the repair

The reason for the appearance of a warning message on the screen of the iPhone 6S, in our case, the u5200_rf chip was faulty. Namely, the occurrence of a short circuit due to the fall of the smartphone. The repair consisted of replacing Wi-Fi. It was important for a novice master of soldering boards from the ECB to learn how to perform such repairs himself. And when choosing a training center for phone repair in Yekaterinburg, the best option was Bgacenter.